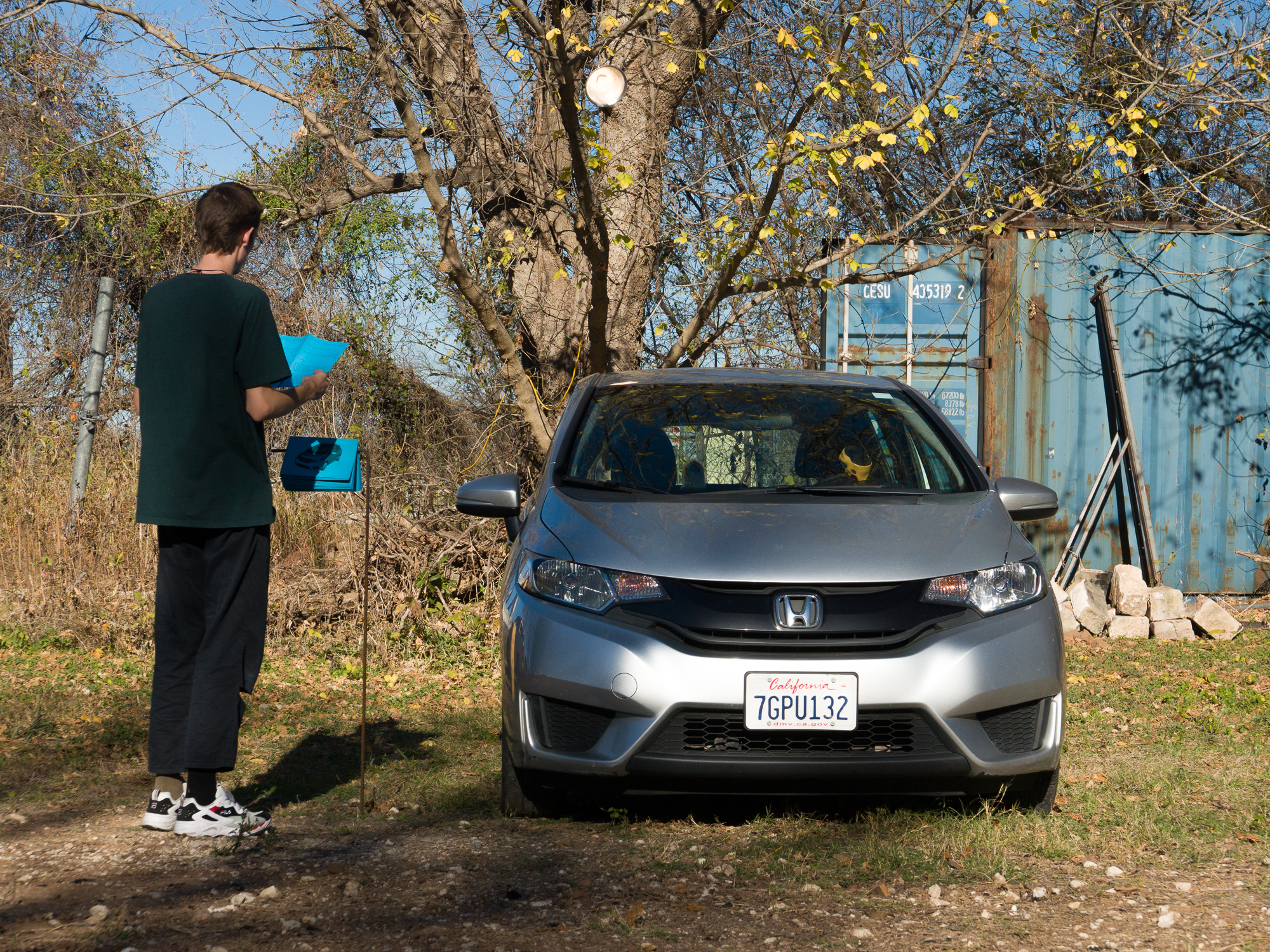 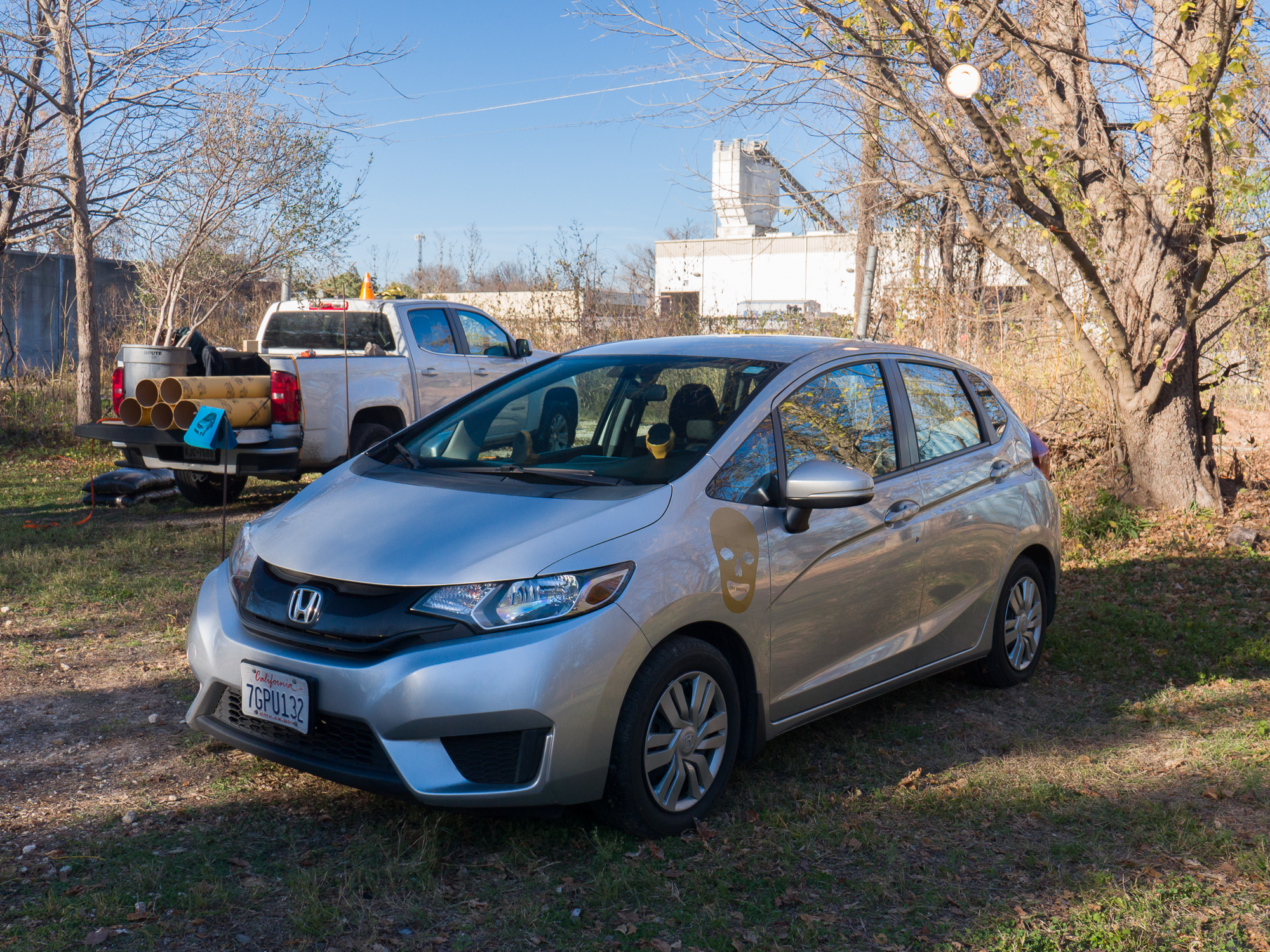 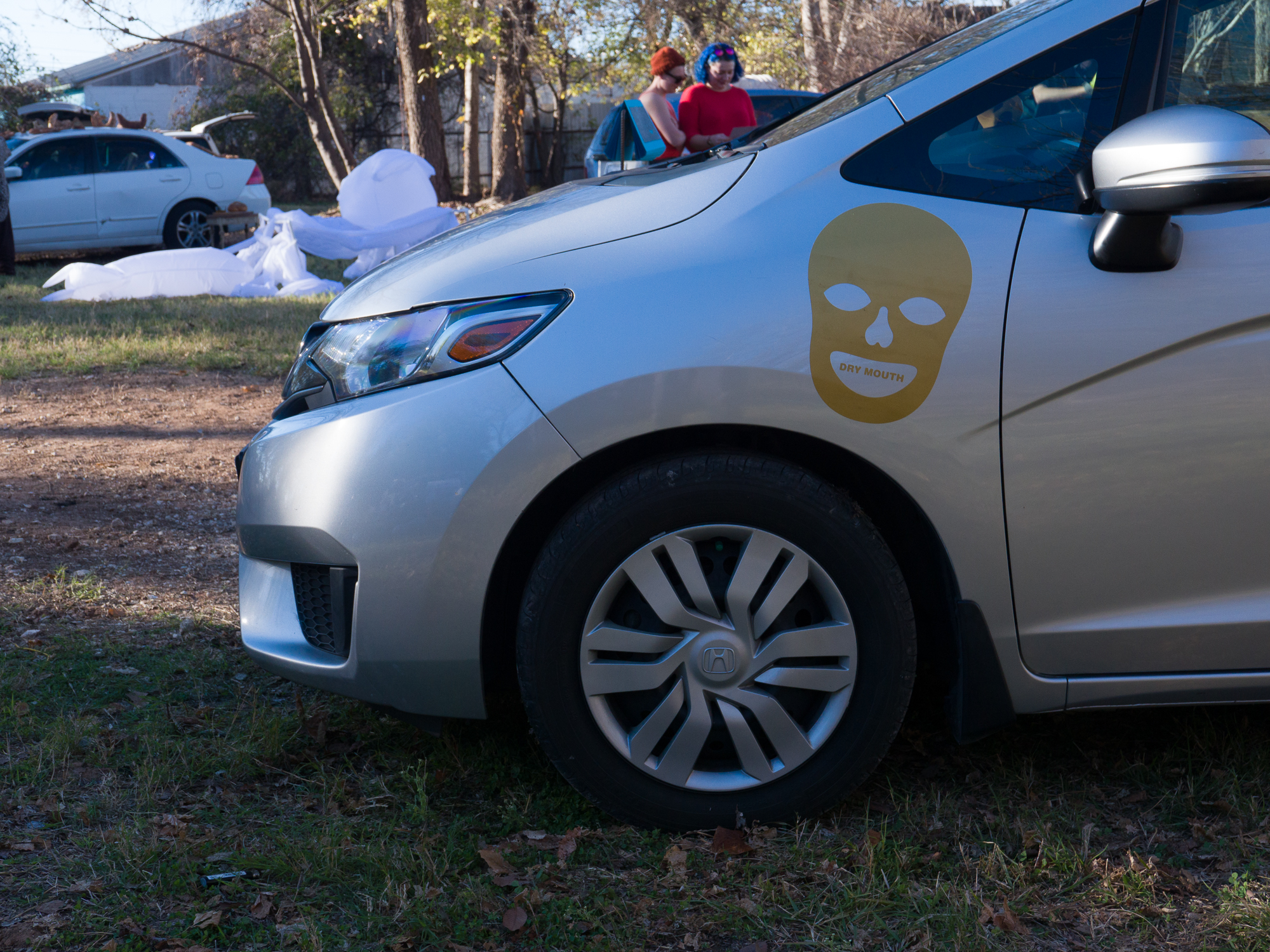 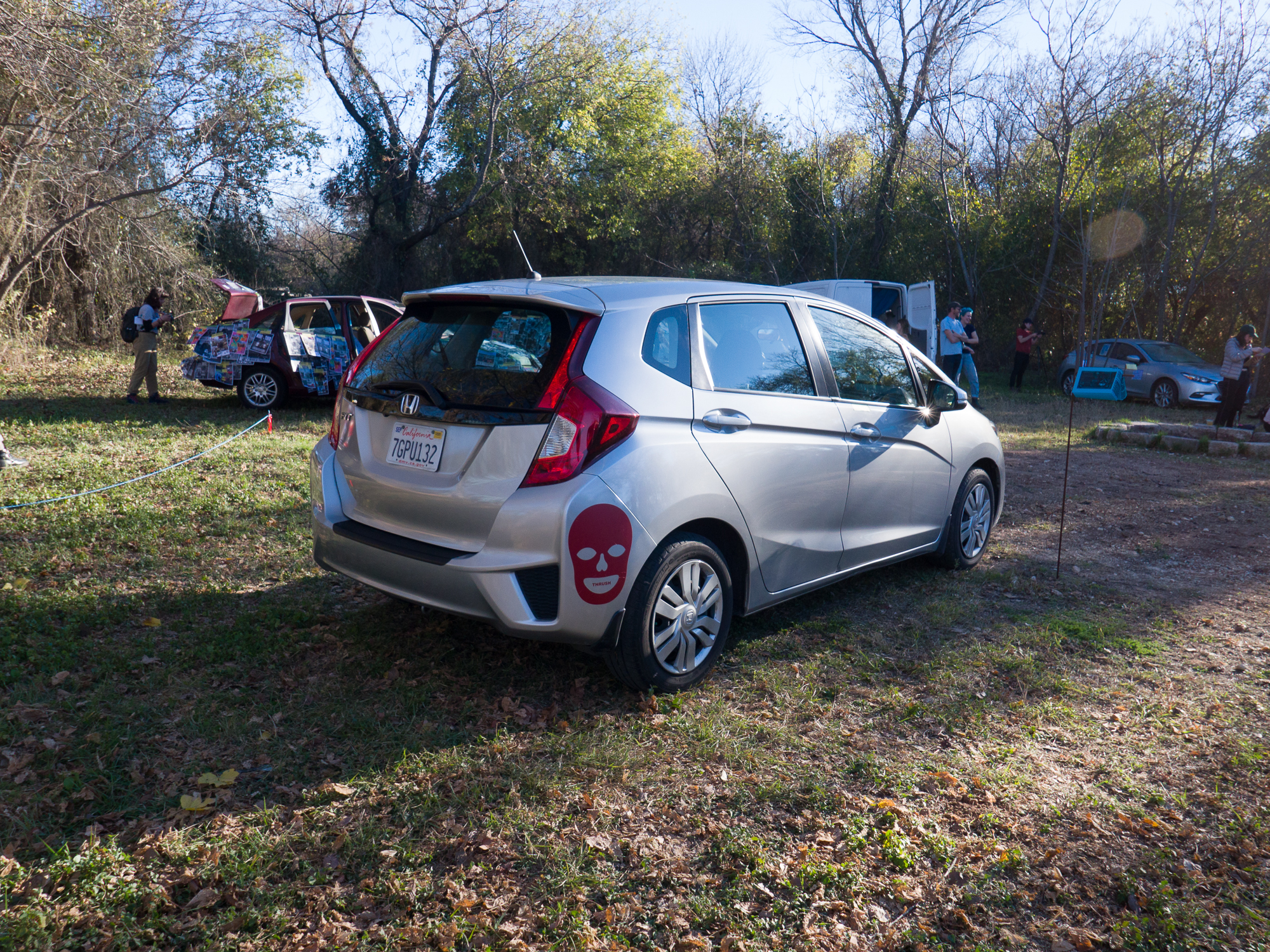 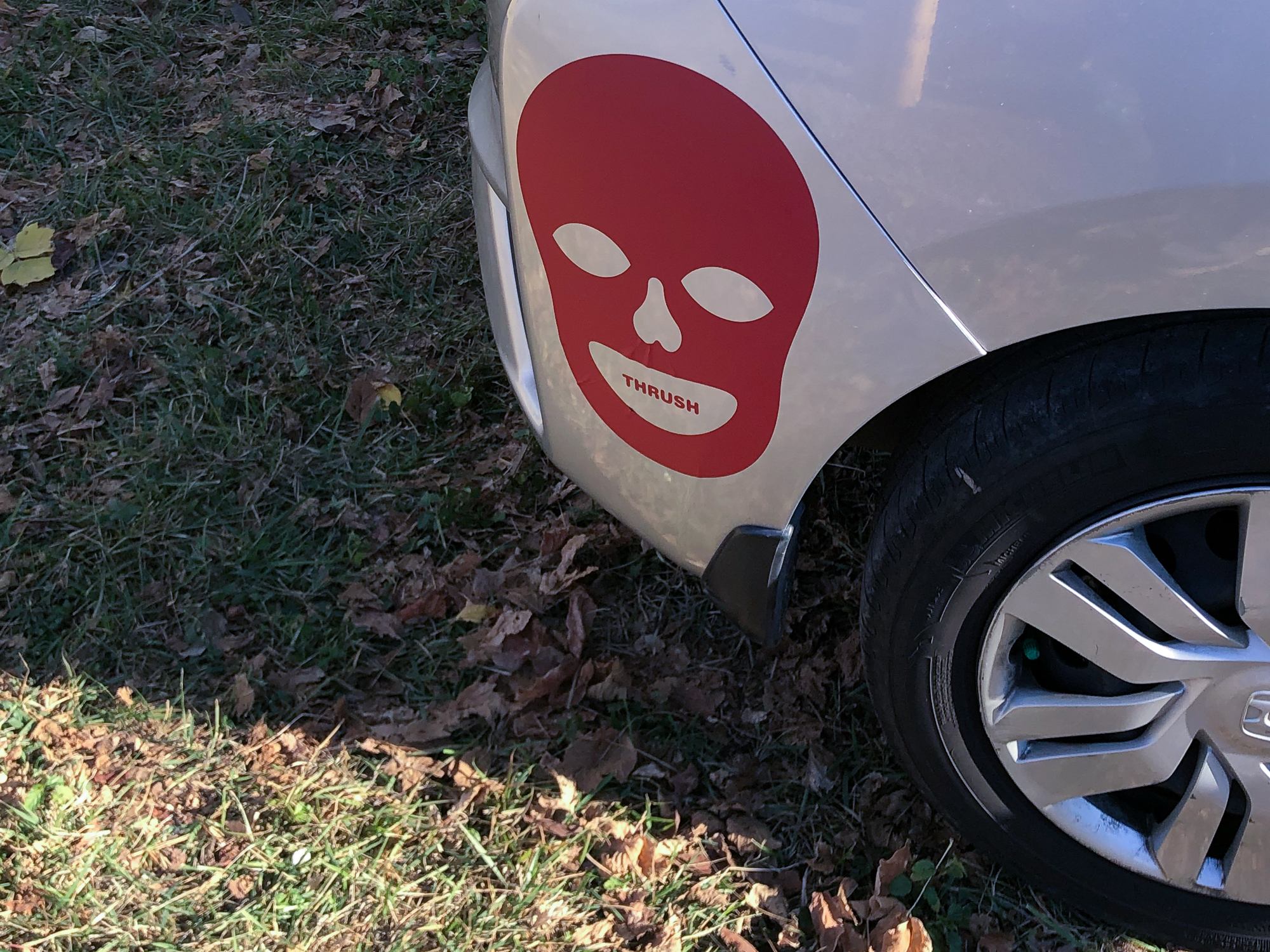 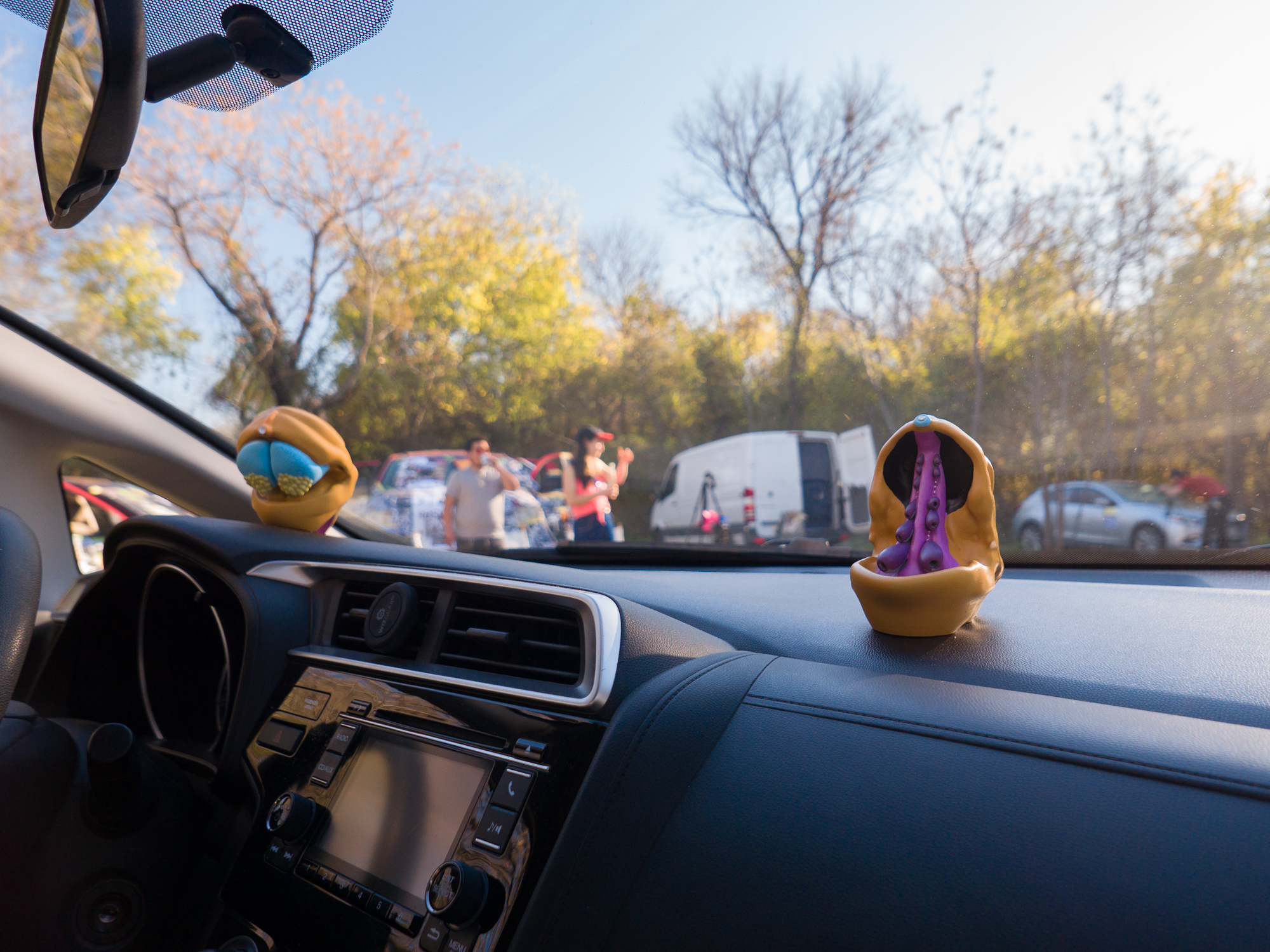 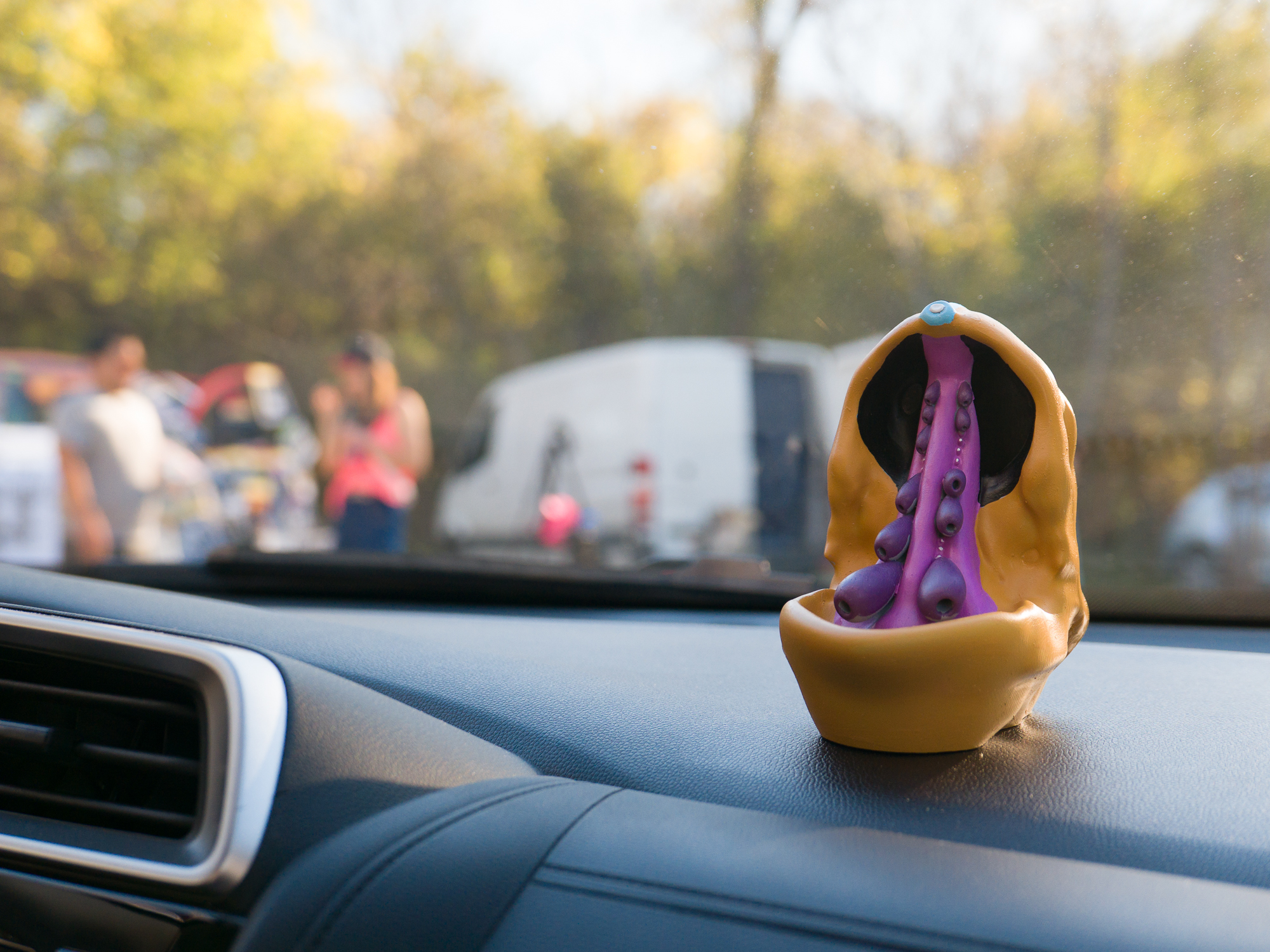 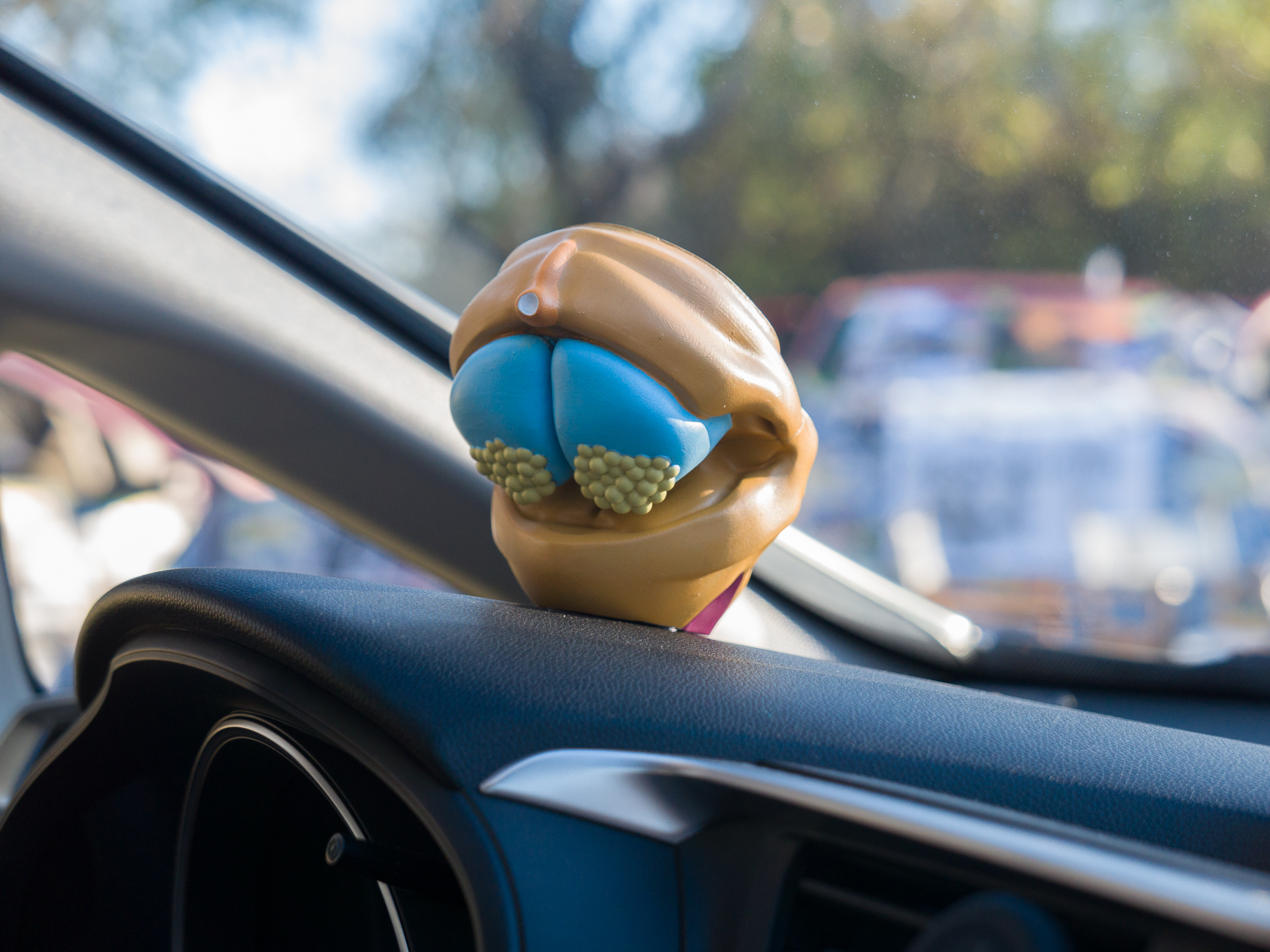 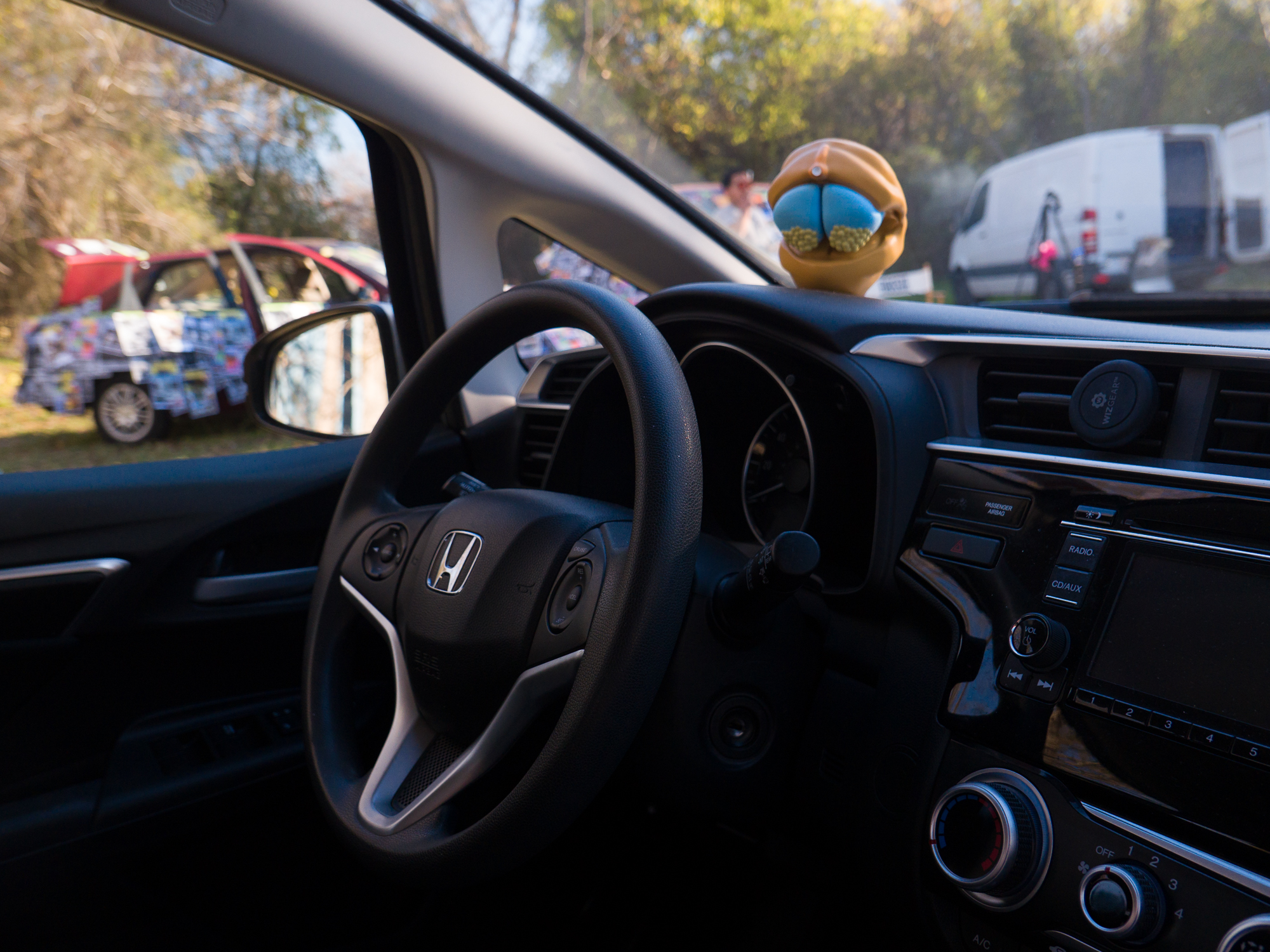 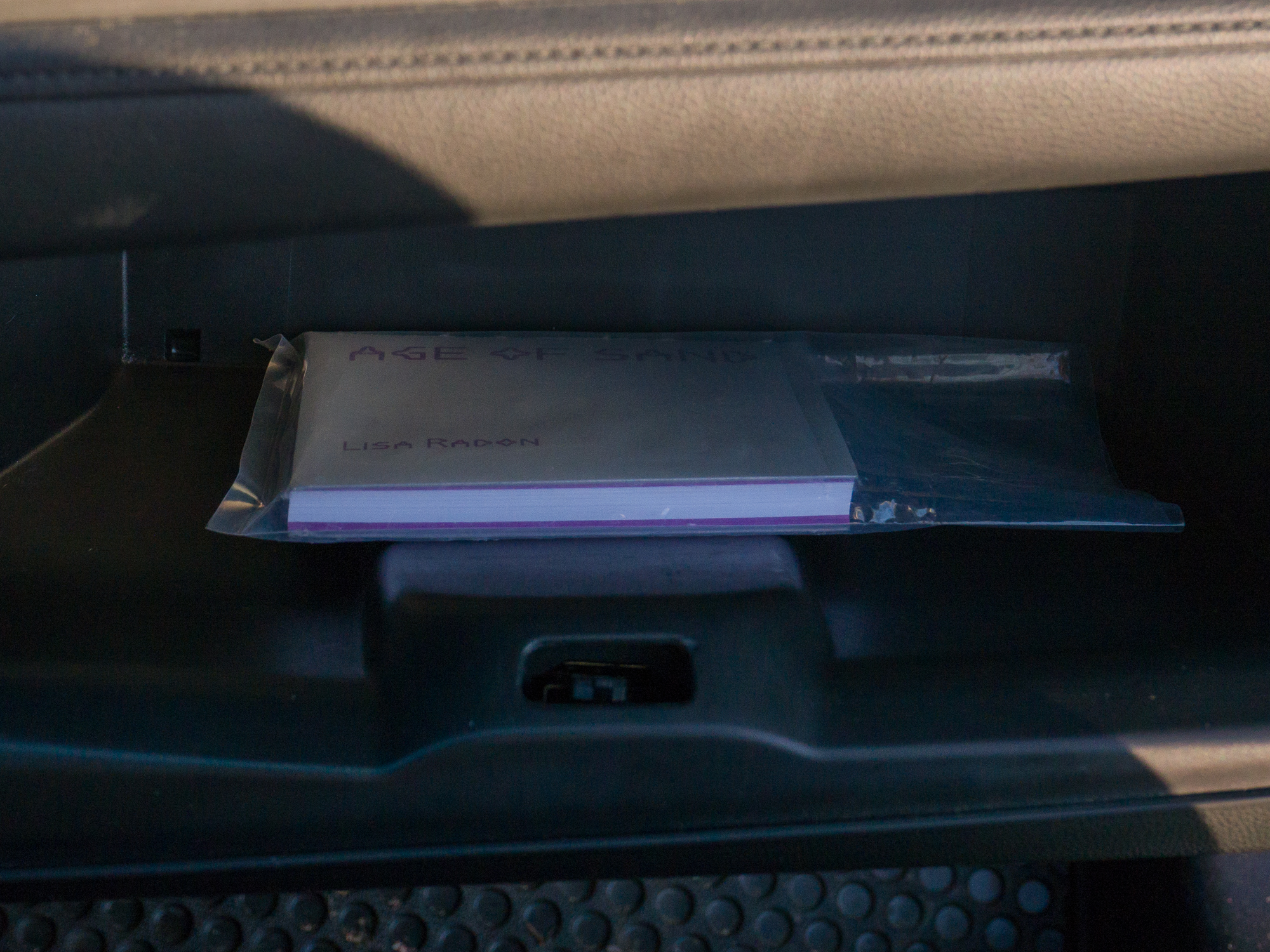 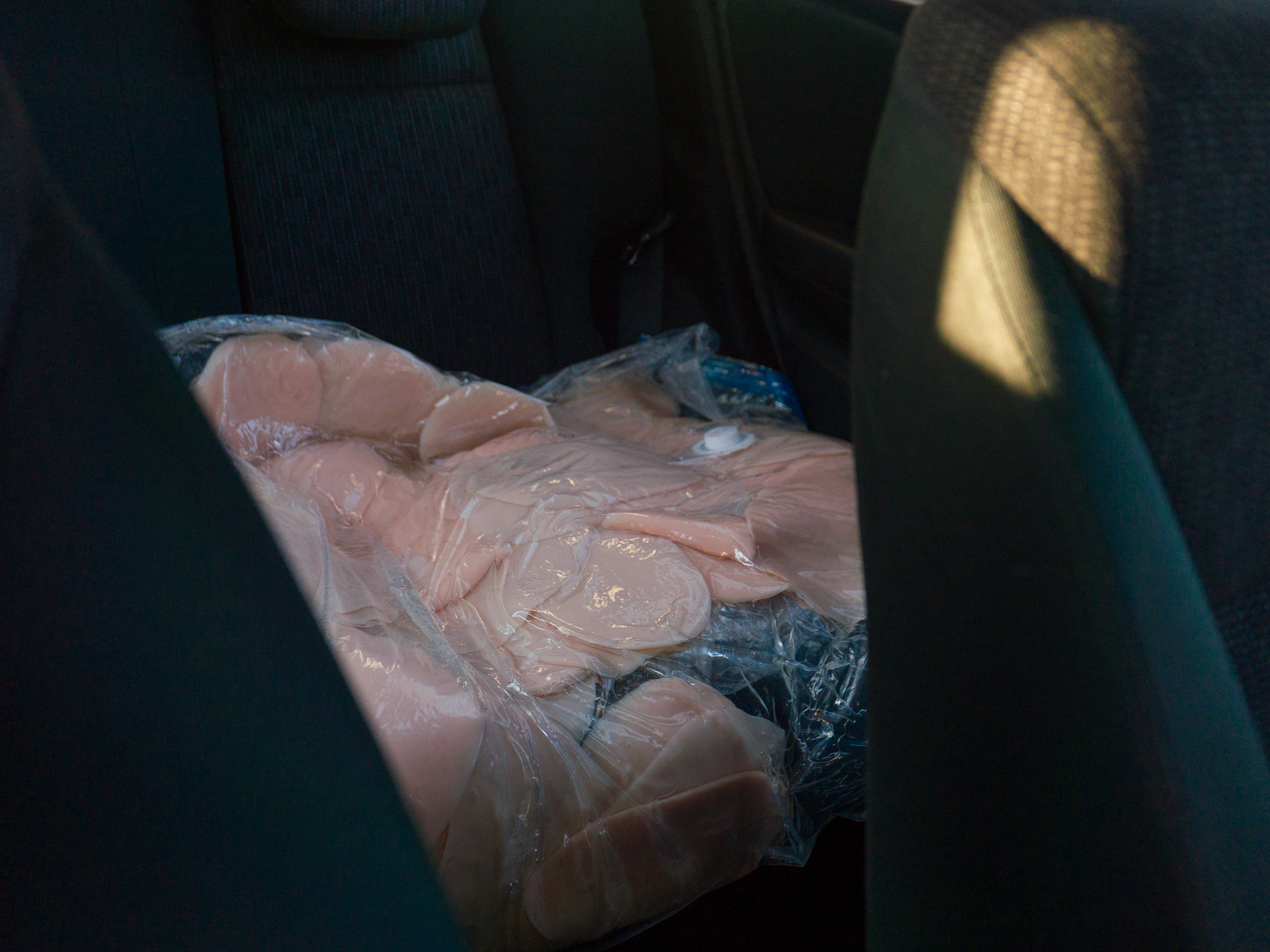 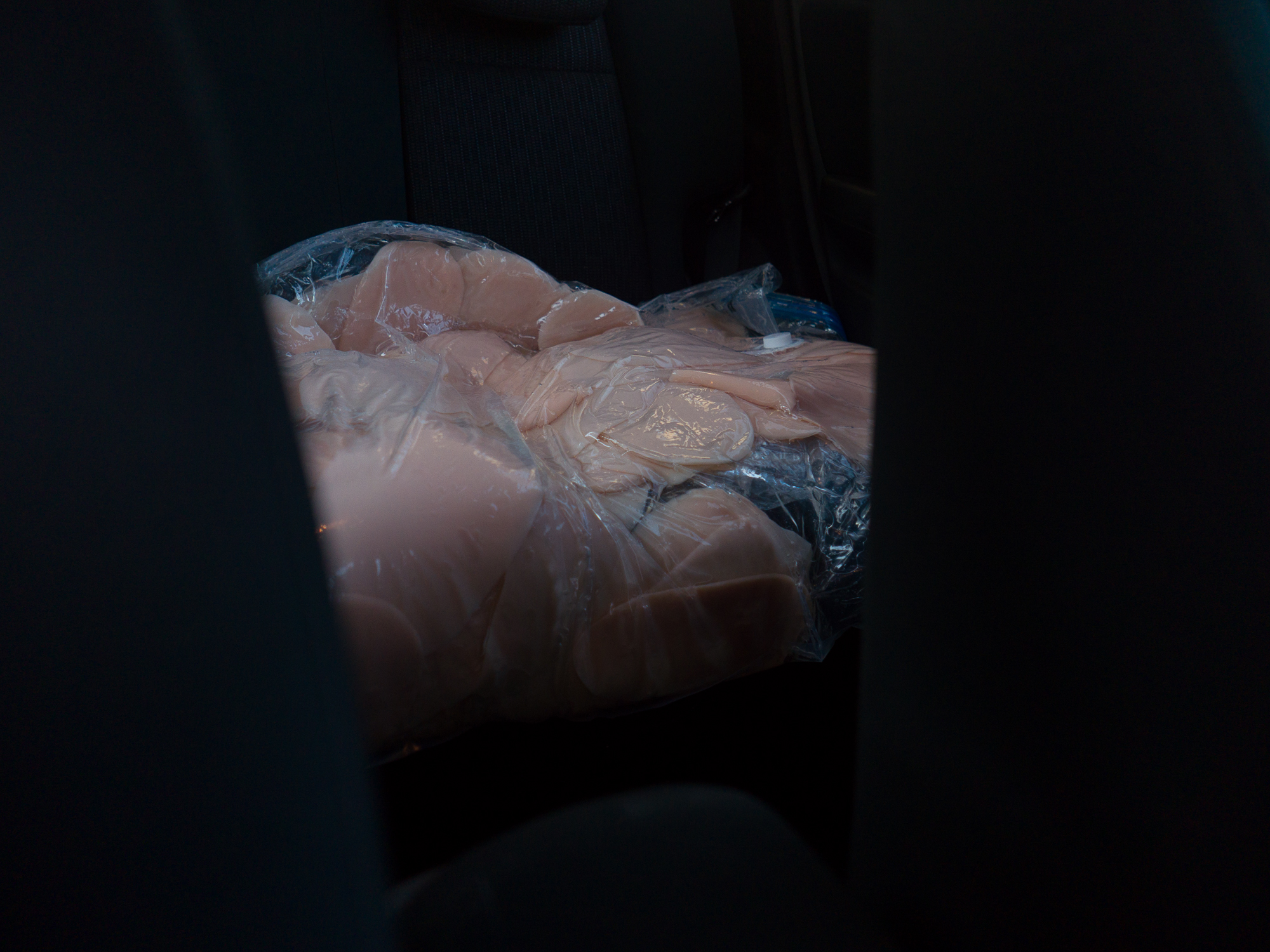 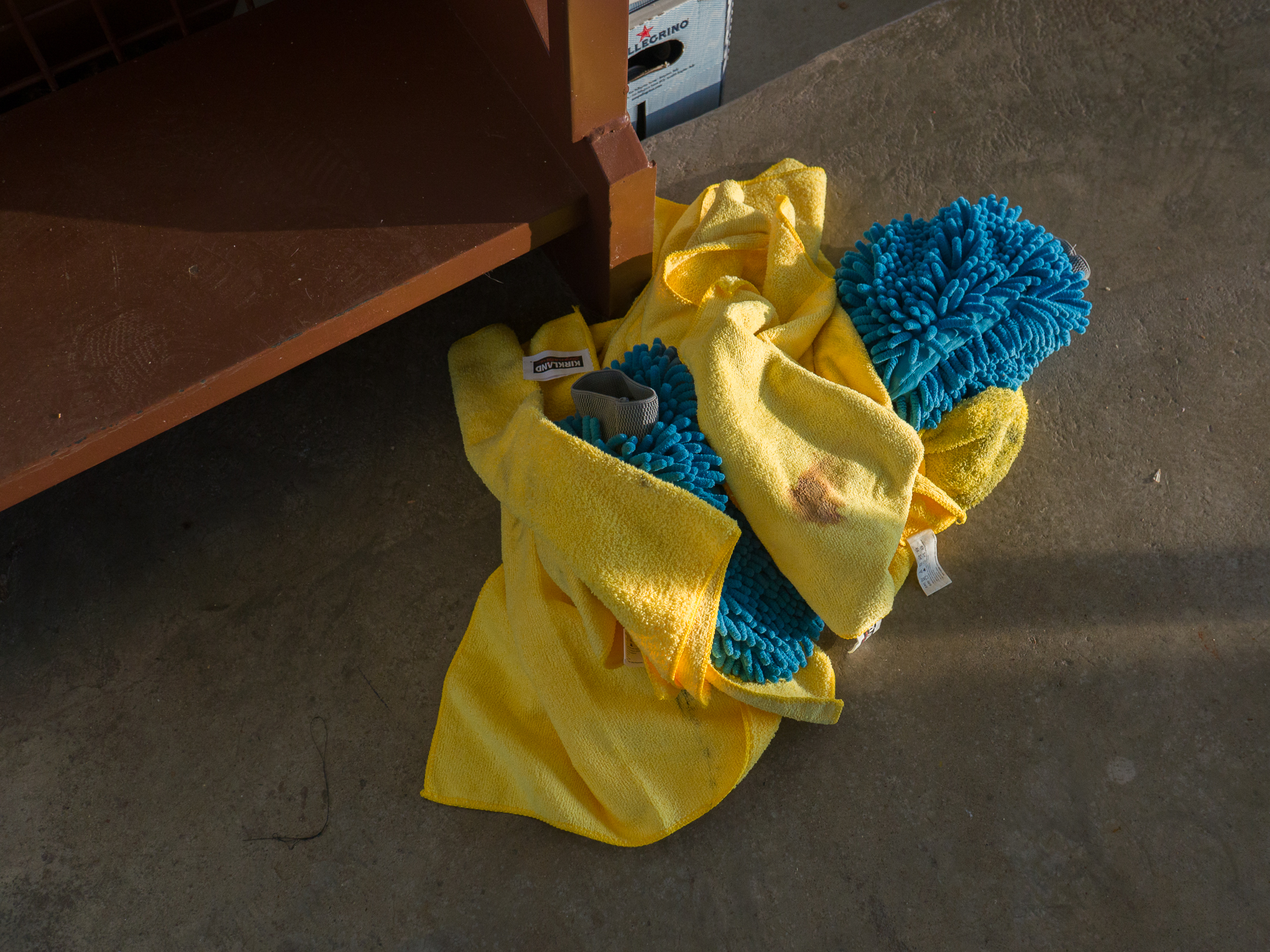 Wooba is overjoyed to present a group show inside Merideth Hillbrand’s 2015 Honda Fit as part of Partial Shade and CoLab’s Transmission exhibition.

The interior of a compact car is totally unlike most of our other interiors. Whereas the insides of houses, schools and other buildings represent a conjunction between the economy, construction goods sold in sheets and our presumed, imagined or actual needs; the automobile interior has developed along entirely different material, economic and technical bases. No where else are we enclosed in rounded pods with ovular cut-outs for drinks, arms, torsos, etc. to fit. There is hardly a straight line anywhere in a modern compact car. The exterior has been shaped by the erosion of simulated wind. Like a loose tongue feeling along the mandibles for missing teeth each interior member of the car has been molded by simulated human bodies thrashing about in endless virtual calamaties.

While the experience of driving in a car might feel cinematic, like a specular experience, the reality of the car interior is that it is a giant mouth. The sparse steel members form a frame over which various plastics – pliant and not – are stretched and pulled giving the ones on the interior the texture of skin, the ones on the exterior a simulation of metal. We taste the inside of the car with our bodies, the air inside fills with our breath, we become an entry for a new compound organism that circulates our work through the economy.

As cars get more expensive the interiors are shaped less by idealized models of bodies in motion and more by the luxury of materials. This is where we get the angular dash of a the Tesla for example. The materiality of the luxury car presumes our pleasure in that experience, it proposes the interior of the car as a delicacy to consume. The Honda Fit, a compact car, is not so much a thing to consume as it is a site of consumption. It is a vehicle used when one’s labor is expended to benefit others elsewhere in the organism, it’s a tent instead of a house. When the labor of others benefits you, you get a room.

Vans are excluded from this schema.

Nathan Azhderian holds a BFA from the Cooper Union for the Advancement of Art and Science and an MFA from Yale University. He has been an Artist-in-Residence at Yaddo in upstate New York and at the Rijksakademie Van Beeldende Kunsten in the Netherlands. He currently works as co-director of Escolar in Sonoma County, CA, where he also maintains a studio practice.

Nicolas G. Miller is an artist and writer living in Los Angeles, California. His artworks stage an encounter with the coiled unconscious tensions of contemporary space.

Lisa Radon is an artist and poet whose solo presentations include those at PANEL (Los Angeles), Et al. (San Francisco), Jupiter Woods (London), Pied-à-terre (San Francisco), Ditch Projects (Springfield, OR), Artspeak (Vancouver, B.C), and the Portland Institute for Contemporary Art’s TBA Festival. She’s participated in group exhibitions at RONGWRONG (Amsterdam), Titanik (offsite at Alvar Aalto’s Paimio Sanatorium), Castiglioni (São Pãolo), and the Henry Art Gallery (Seattle). Her publications include Age of Sand (PANEL, 2019), Wholeness Engine (Jupiter Woods, 2016), The Blind Remembrance of the Swirling Bone (Artspeak/Ditch Projects, 2015), The Plumb and The Wave (2014), The Book of Knots (c_L Books, 2013), Infinity Increaser (PICA, 2012), and Prototyping Eutopias (2013). She is the editor of the journal EIGHTS, and publisher with Eleanor Ford of the pamphlet series Times Atlas of the Moon.