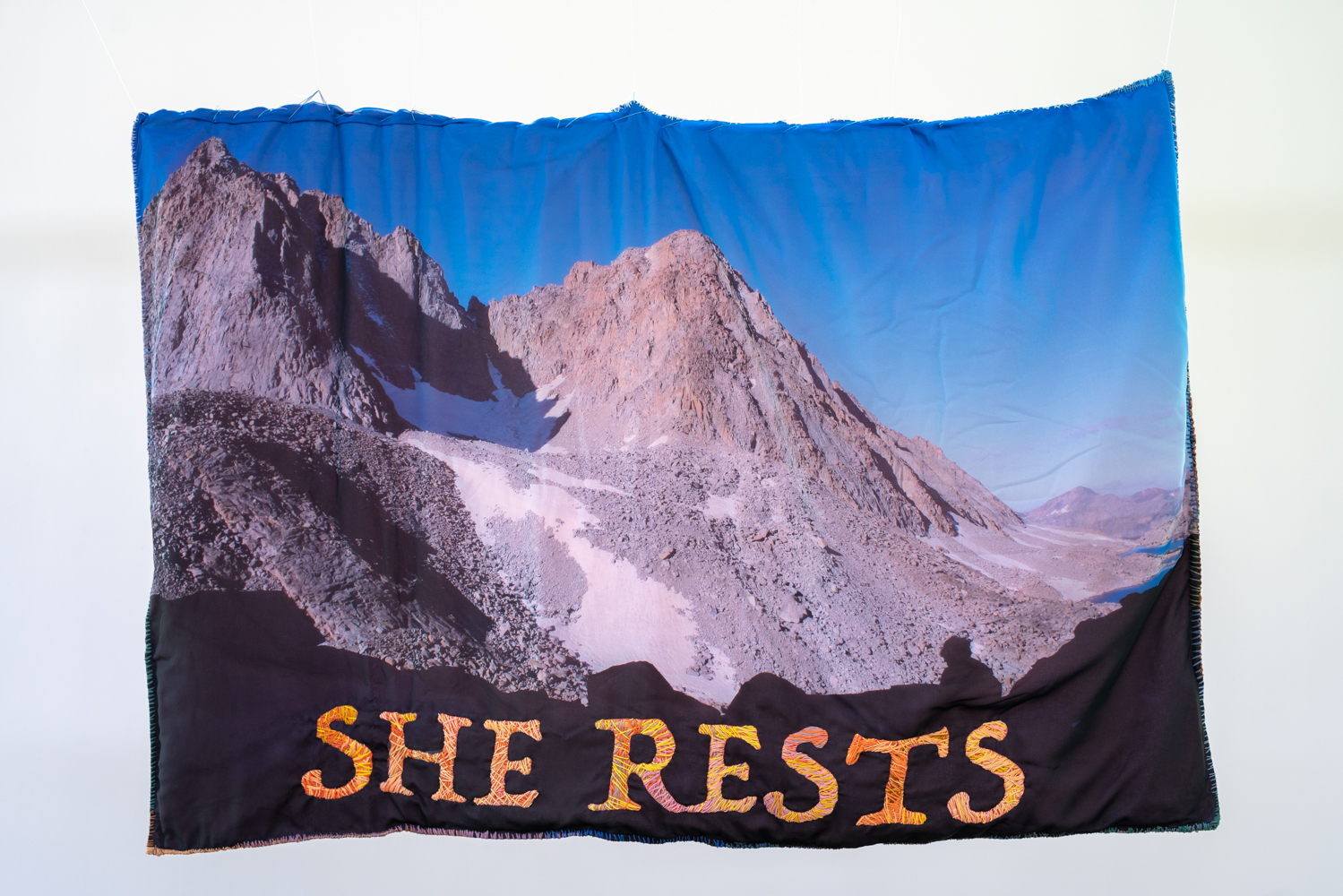 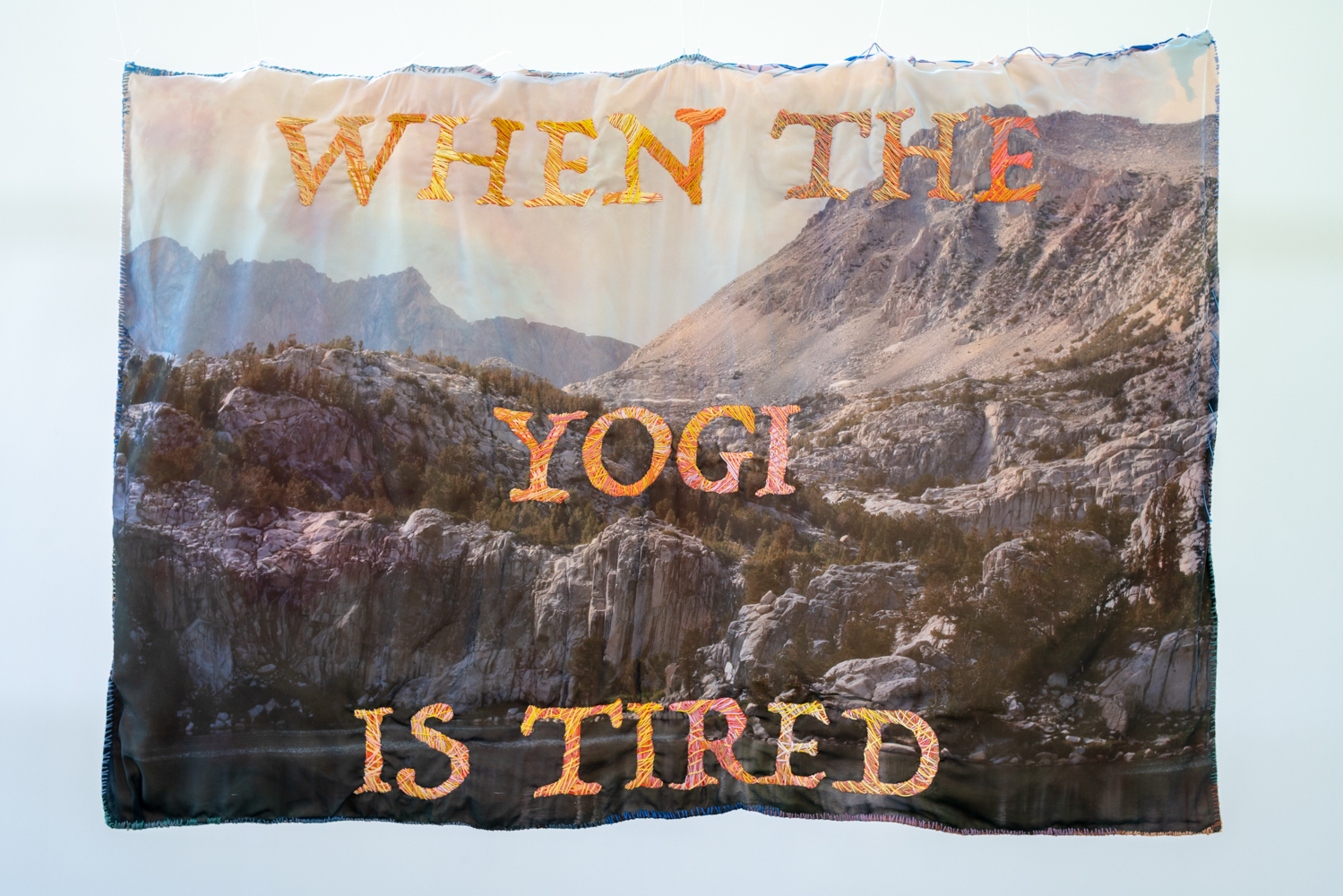 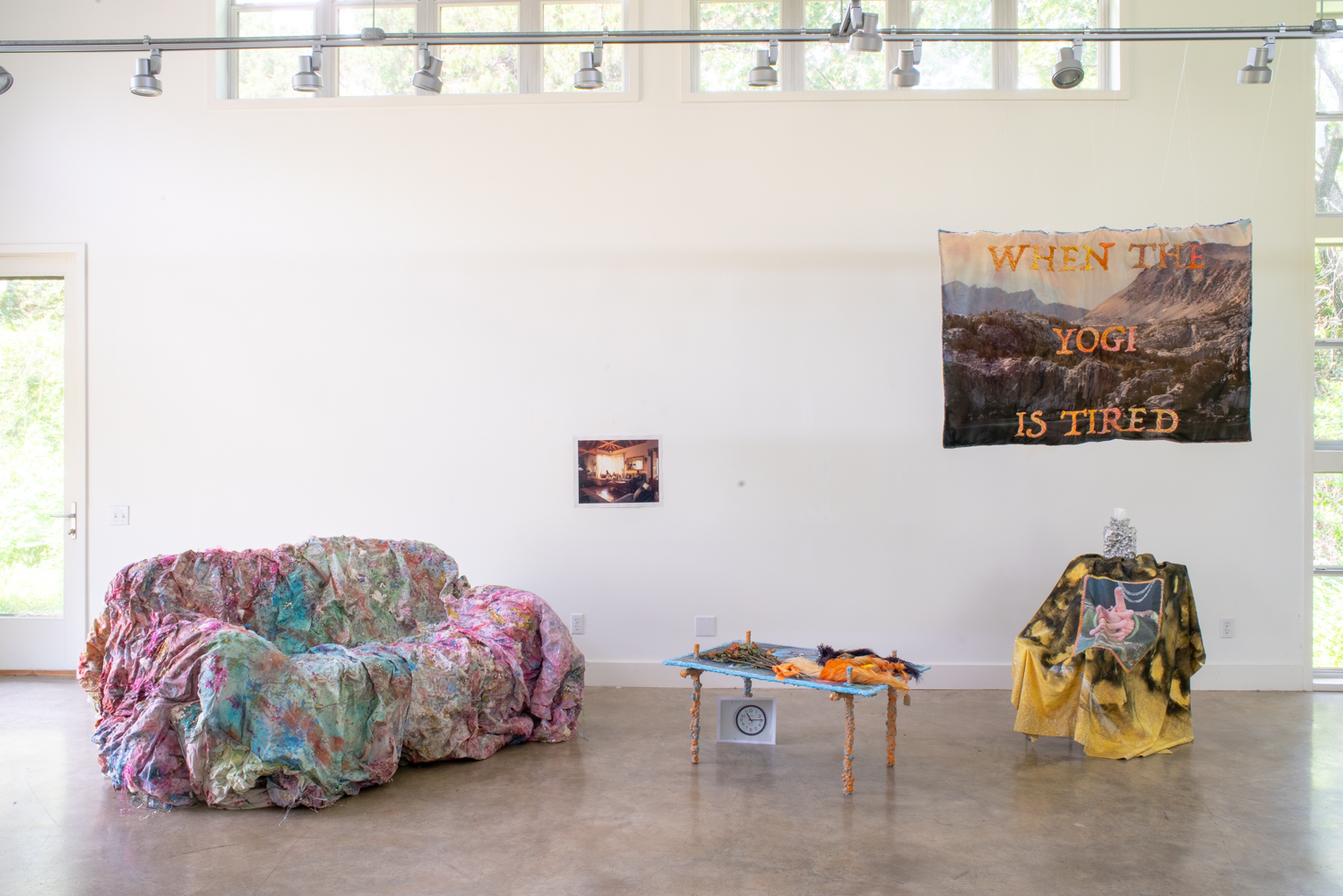 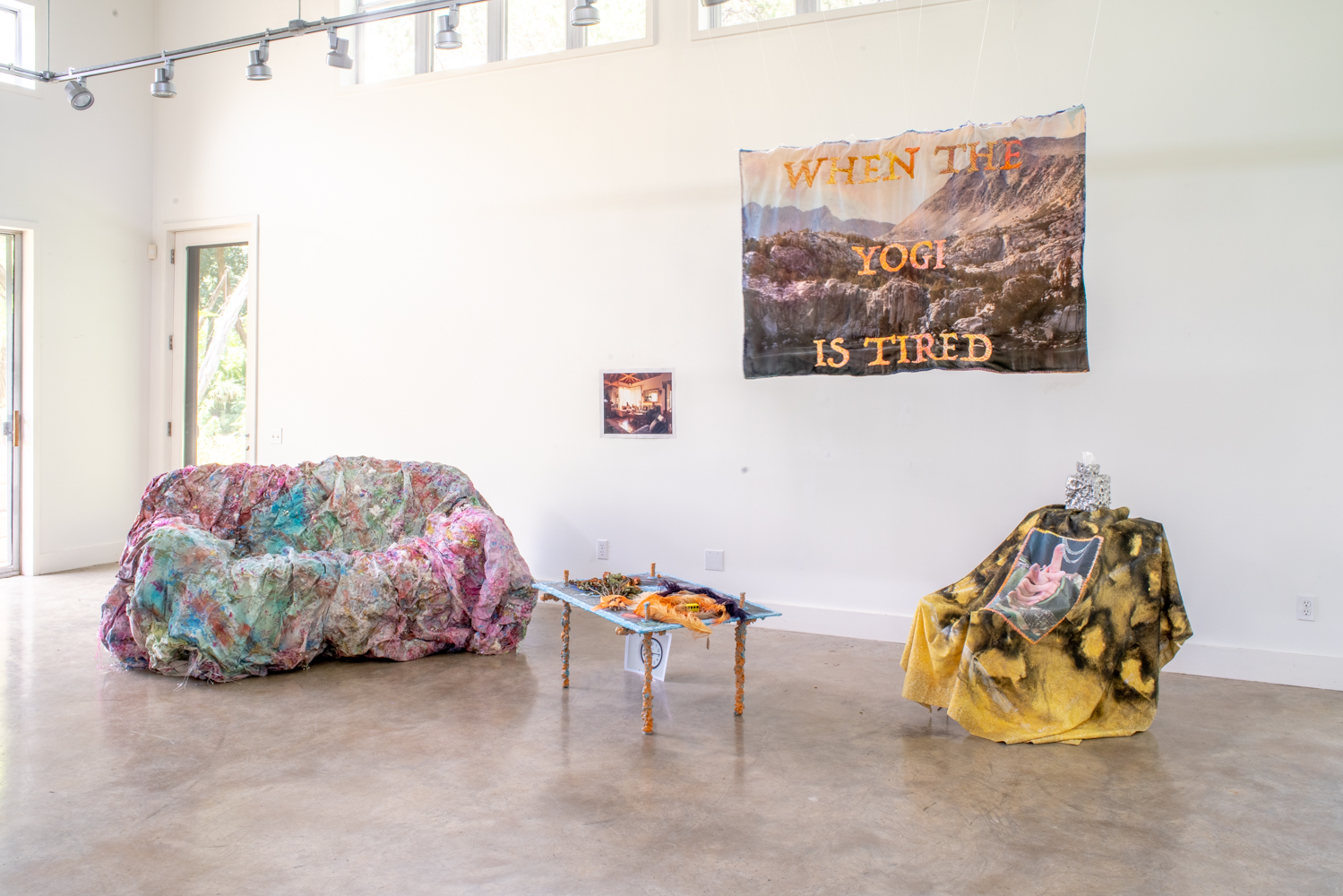 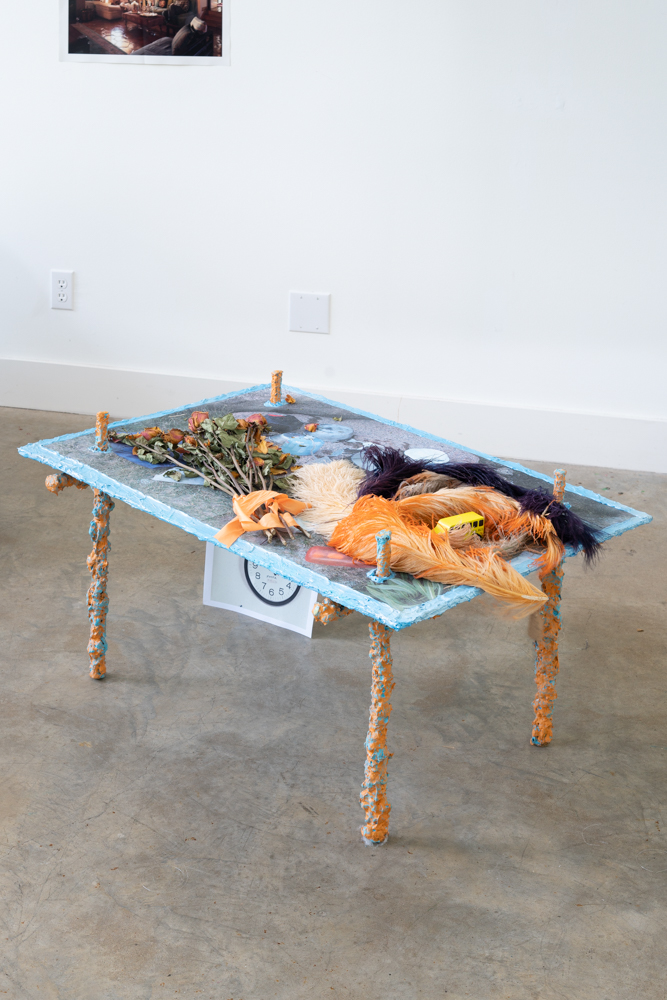 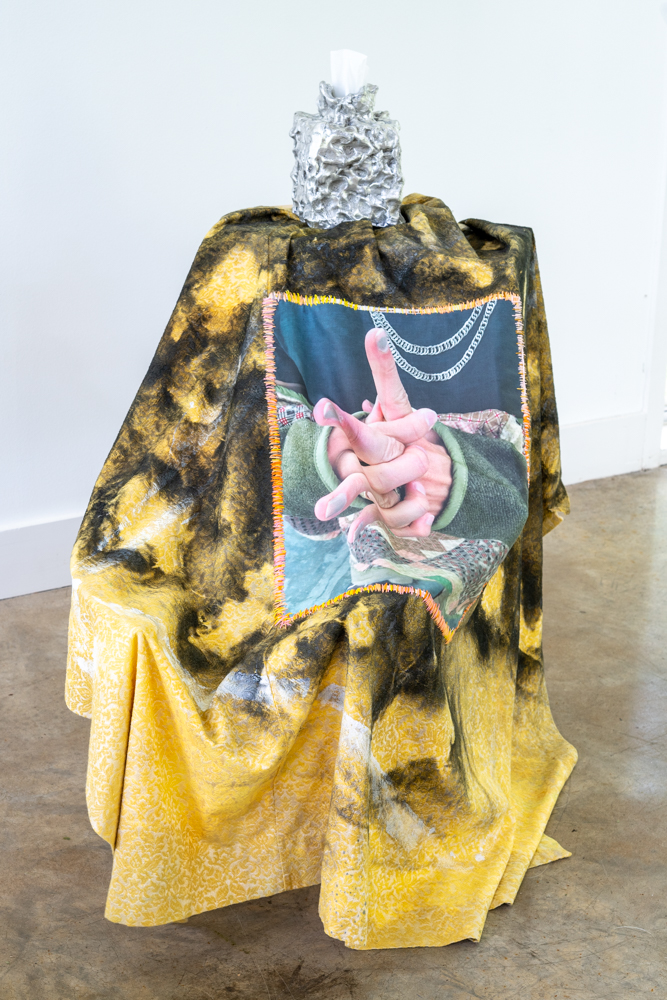 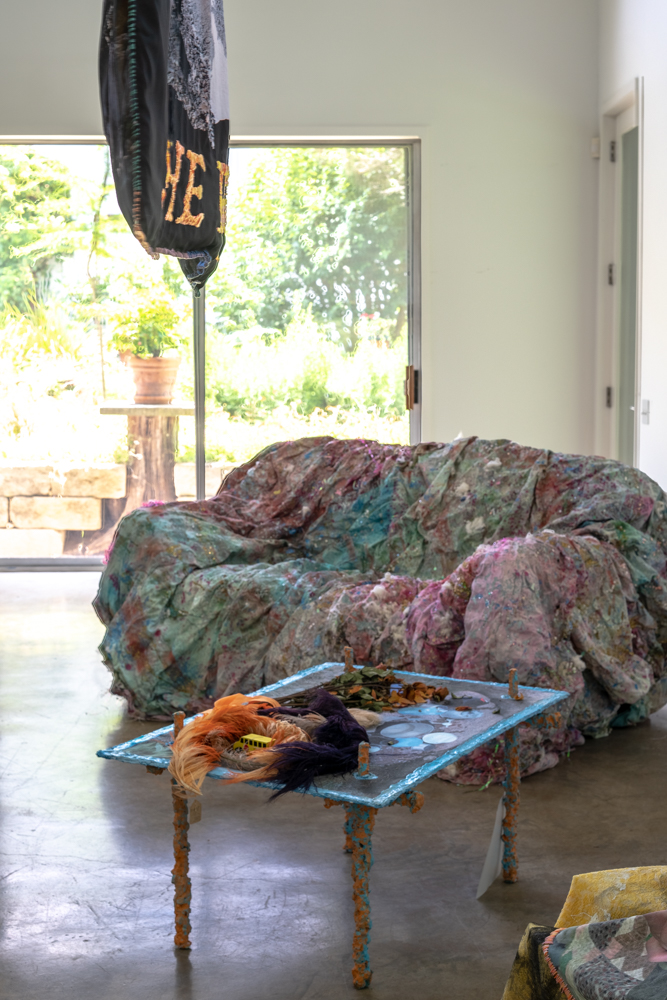 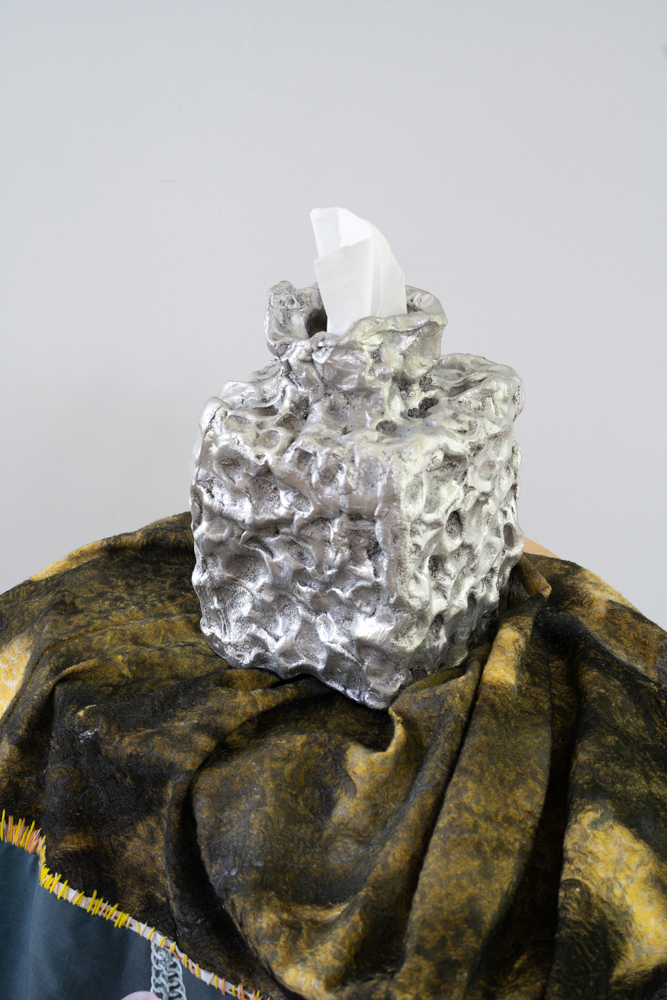 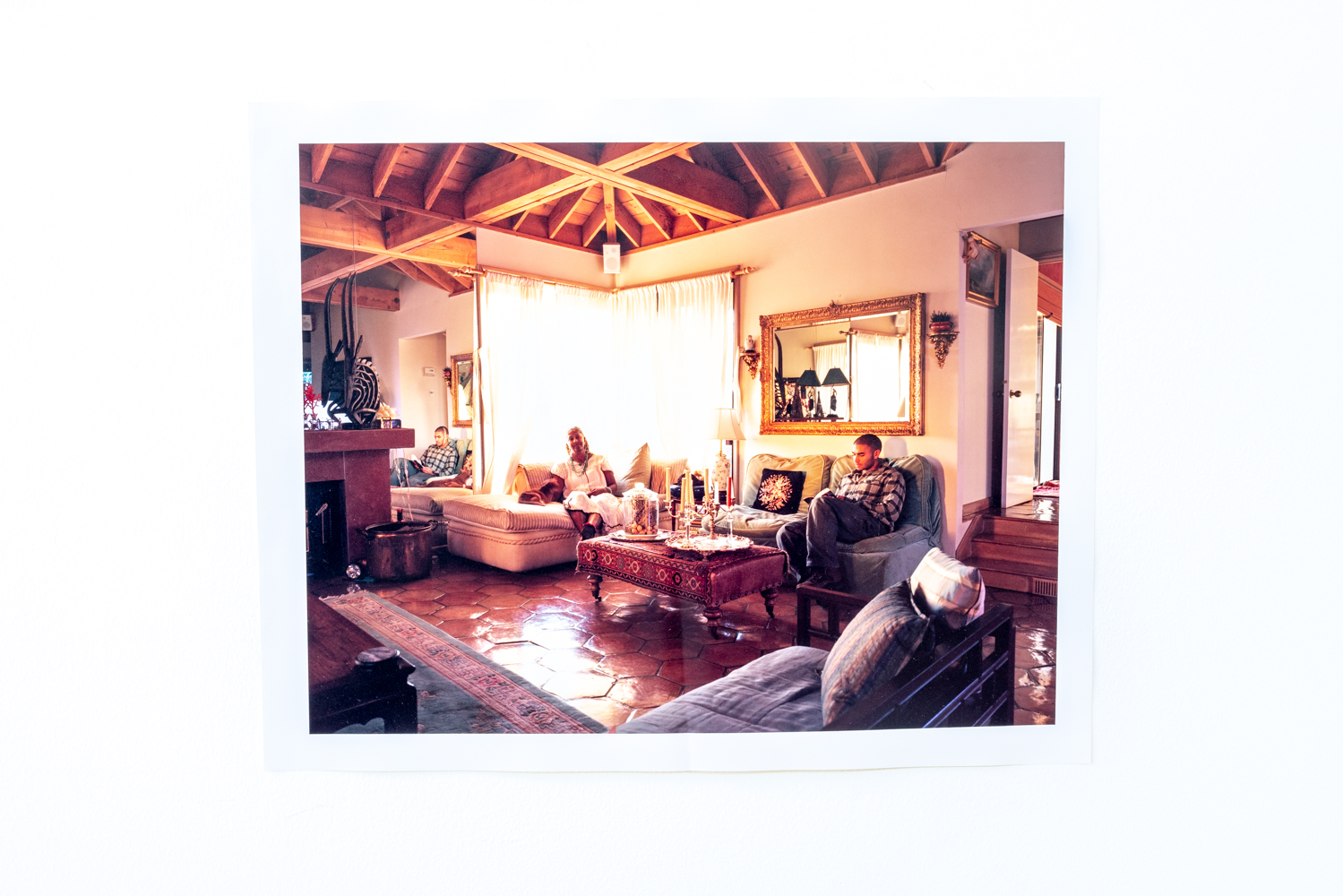 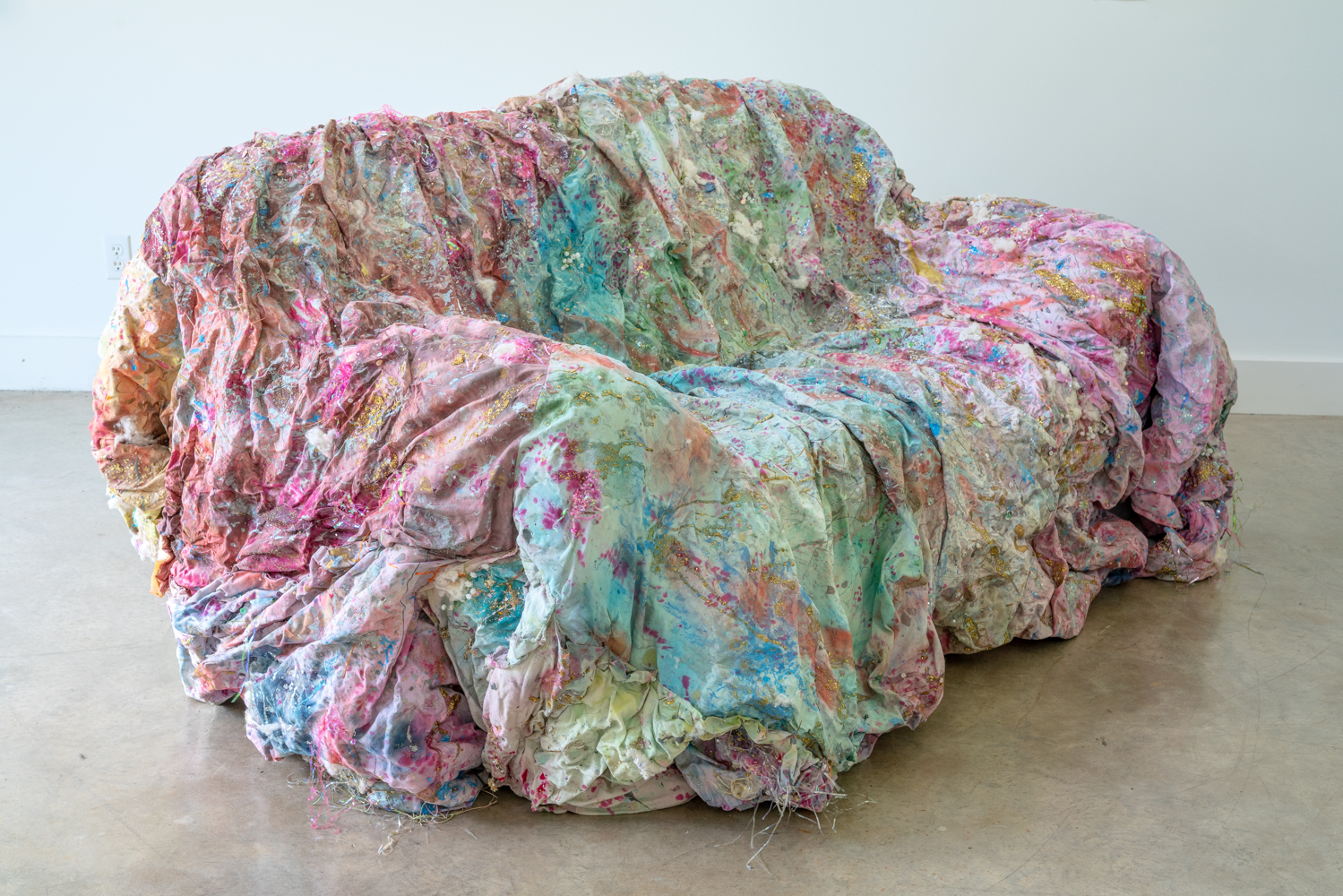 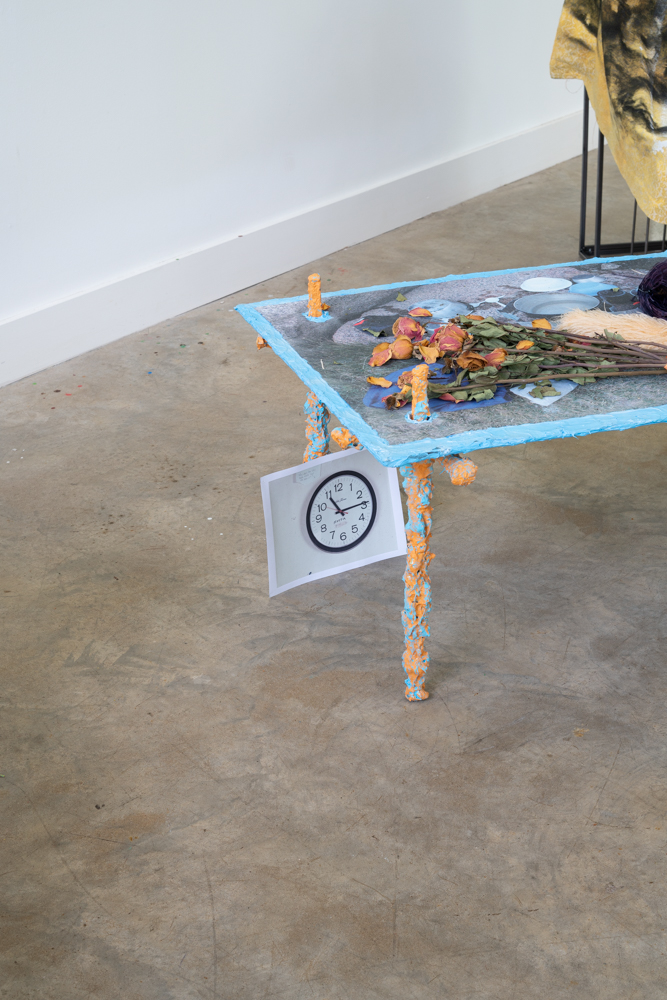 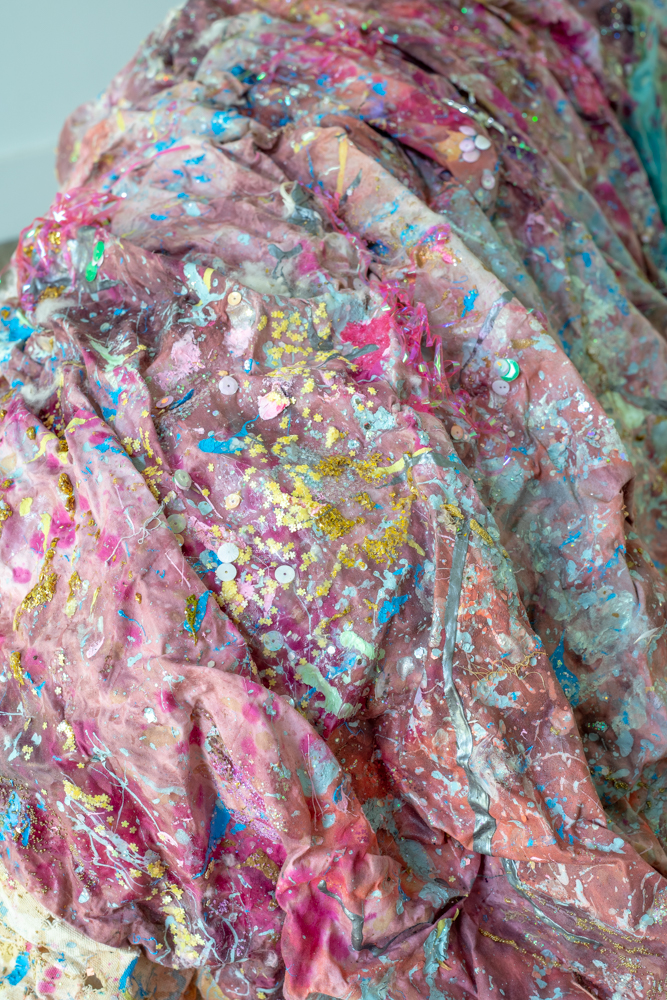 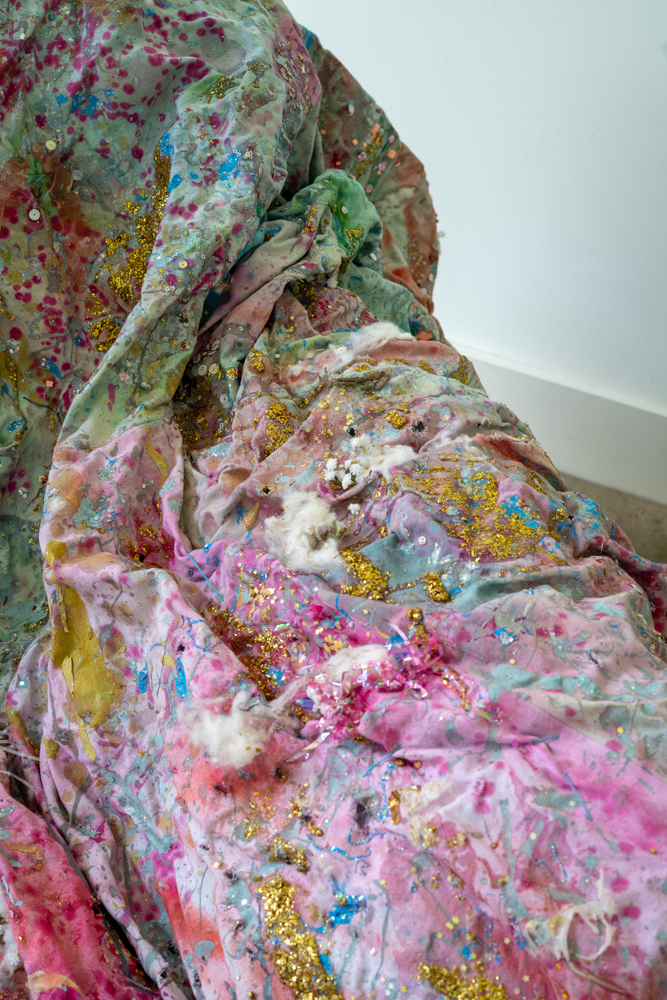 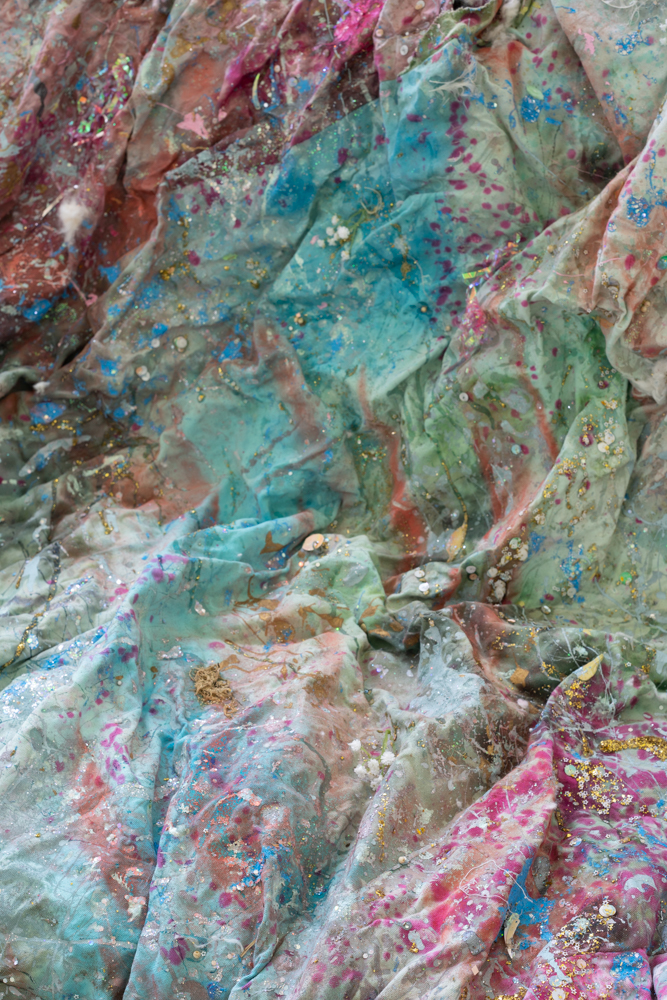 Wooba is pleased to host an exhibition of new work by Los Angeles-based artist Audrey Hope. “Thick Skin” overlays the framework of a typical therapist’s office with imagery from backpacking trips into the Sierra Nevada mountain range in California. Both are spaces that people often conceive of as healing, but which the artist works to reveal as fraught, vulnerable, and disorienting.

Two photographs from the artist’s undergraduate work, where the exhibition’s artist and organizer/curator met, are included alongside freestanding and hanging works. A C-print from the series Psychotherapists with Their Children entitled “Tracee and Phillip” (2007) is mounted on the wall, while an 8x10” Polaroid (made, not likely by the artist, during a large format photography demonstration) of a clock hanging in a basement classroom at the Museum School rests beneath the table. Discussions of time were frowned upon during the backpacking trips of the artist’s youth, but time is one of the key boundaries established (and toyed with) in a therapeutic relationship. “WHEN THE YOGI IS TIRED SHE RESTS” is a hanging, double-sided quilted work that makes ironic reference to cross stitch and inspirational texts used in home decor. In this piece, the text is embroidered into chiffon printed with photographs of two views of Mount Darwin.

The exhibition includes three freestanding sculptures. The first is a couch cover made from rough, sharp, and glittery colorful canvas – a welcoming and cruel seat. The second is a wonky chair-like armature with a painted brocade panel draped over it that frames a photograph of gently clasped hands appliqued using rough but obsessive embroidery. Perched atop this form is a cast aluminum tissue box cover. It’s surface is touched and roughly modeled with finger indentations. The tissue box cover, like the couch cover, is a layer of protection and aesthetic coating over something that doesn’t need encasement.

The third freestanding work is entitled “Table laden with gifts from my therapists on a photograph of the pot washing rock, Mount Darwin.” The tabletop is also a space between people, a boundary–a still life constructed out of the essential elements in a therapeutic session. The gifts that therapists have given the artist seemed, to her, like moments when those boundaries were transgressed. She says, “Gifts have always meant a lot to me, they are objects between people, emotional burdens transmitted and made manifest. Generosity is such a messy and complicated thing! The objects, for me, hold the promise of being cared for, which is also terrifying because that agreement could be betrayed. Anyways, that’s all a very personal way of thinking about the objects’ affects.” On backpacking trips, the pot washing rock is an idiosyncratic dish rack, a provisional drying surface, a makeshift table. And of course, just like in everyday life, the question in the mountains of who washes the dishes is a fraught one, full of potential resentments. The whole exhibition has a stage-like orientation. On this stage, Hope hopes to explore the complex interplay between generosity, the search for healing, and the natural world.